My first testimony appeared in the April 1962 issue of The Christian Science Journal. It related my victory over a viral foot infection that occurred while I was in college. After some months of hesitation, fear, and discomfort, I finally turned wholeheartedly to God, vowing to seek healing through Christian Science alone. The infection healed rapidly.

A year ago I realized how much spiritual growth had taken place in my consciousness since that incident. When my youngest daughter came home from three weeks at camp, she said she had a splinter in her toe. Examining the foot, I saw that the problem was not a splinter. Rather, it appeared to be the same type of infection I had suffered during college.

Send a comment to the editors
NEXT IN THIS ISSUE
Testimony of Healing
About three o'clock one morning my mother phoned me in a... 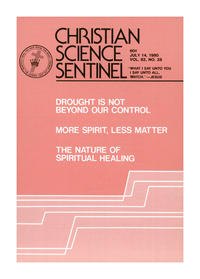