The freedom of morality

What do you think of when you hear the words "morality" or "immorality"? At one time I thought these terms applied only to sex. I generally defined morality as abstention from premarital and extramarital sex, and immorality as the exact opposite. The moral person, as I saw it, enjoyed a constant but passive state of "goodness." The immoral person was actively evil or "bad." I didn't realize just how narrow and therefore inaccurate these definitions were until I unexpectedly found myself living right in the middle of a less-than-moral atmosphere.

In the Christian Science textbook Mary Baker Eddy, who discovered and founded this Science, writes, "Never breathe an immoral atmosphere, unless in the attempt to purify it." Science and Health with Key to the Scriptures, p. 452; I was a college freshman living with five female floormates. One swore profusely and continuously; another ate in a similar manner; the third girl smoked a pipe—to keep herself from eating—and slept with her boyfriend every weekend. One base thought led to another, and within weeks we were all swearing, we were all eating too much, and—thanks to paper-thin walls—I felt as though I was a captive audience to the goings-on in the next room. Very soon all six of us became irritable, catty, and disagreeable to live with. 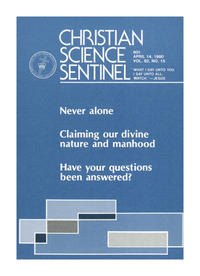