"Not another football game!" I groaned to myself as my husband turned on the car radio for our two-hour drive home. I don't mind a football game once in a while, but I really wasn't interested in listening to this one. There were a lot of things I needed to pray about, and I felt the sportscasters' commentary would be distracting. How wrong I was! I learned a valuable lesson from that game.

After we had been driving for a while, my husband made a comment about one of the plays, and I realized that even though the radio was on rather loud, I hadn't heard a word of the game. Because I had been busy in prayer, I had not been disturbed. There had been no struggle on my part to block out the sounds of the game; rather, it was as though there was no room in my thought for any interruptions. 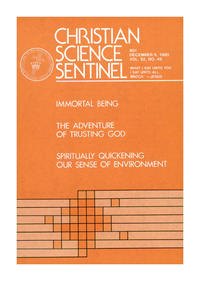