When taking a course in astronomy at a university, I couldn't get away from the dimensions of our earth in order to grasp a vaster scene. I found myself challenged by the enlarged concepts of the universe. One morning before class began, I opened Science and Health with Key to the Scriptures by the Discoverer and Founder of Christian Science, Mary Baker Eddy, and read: "Mind alone possesses all faculties, perception, and comprehension." Science and Health, p. 488;

"That's it!" I thought. "I'm trying to understand this vast subject with a limited, finite sense of mind instead of opening my thought to the intelligence with which God, divine Mind, already knows the universe, and letting His infinitude transform my viewpoint." This realization gave me dominion in studying astronomy. In class that day I suddenly gained a whole new perspective. It was as though I were standing somewhere out in space looking upon the universe, and I could see clearly the relationship of stars, planets, and galaxies. From then on the course was a joy. Just so, mortals need to break away from a limited, finite perception of themselves and a self-centered outlook in order to see God, Soul, and His universe correctly. 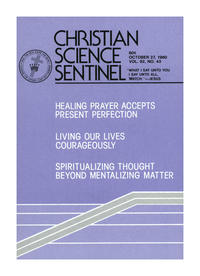