Angels are better than swords

Christ Jesus' disciple reacted violently with a sword when enemies came to arrest his Master in the Garden of Gethsemane. But Jesus told him to put up his sword and said, "Thinkest thou that I cannot now pray to my Father, and he shall presently give me more than twelve legions of angels?" Matt. 26:53;

Automatic recourse to violence is not the Christly response to attack. Jesus had complete trust in God's power to adjust wrongs in a wise way, and on this occasion did not attempt to defend his position even with words when falsely accused by the priests and elders. The Bible tells us "he answered nothing" 27:12; despite the physical hardship and indignities inflicted upon him. It was only later, after his enemies believed they had triumphed, that, according to the gospel account, an angel came and rolled away the stone from the door of his tomb and reassured his followers that he was risen from the dead. The Master's confidence in the spiritual truth he taught was total—and it was vindicated. A whole army with swords, or a team of brilliant defense lawyers, could not have done as well in reversing the spurious picture of error's victory. 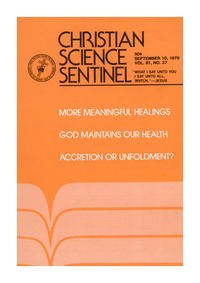