An American government study has estimated that over half of America's wage dollars are going to people whose job is to sit looking thoughtful as they pass pieces of information around, and these workers are now twice as numerous as workers in manufacturing and agriculture combined. The potential productivity of workers in this largest industry is about to grow by several hundred per cent, because of an information revolution far bigger than the industrial revolution after James Watt discovered the steam engine. 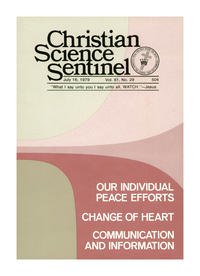