I noted with interest the statement made by Pope John Paul I in your article: "God is Father. Even more, He is Mother." This statement does indeed revolutionize the usual concept of God as an exclusively masculine being. If one complies the names and characteristics given to God in the Bible, one can not avoid seeing that they include the whole spectrum of masculine and feminine qualities. When, for example, God is referred to there as love, and His compassion, goodness, patience, wisdom, forbearance and mercy are mentioned, these may indicate the dimension of God's motherliness. Such qualities, and similar ones, are to be found in the Bible to an equivalent extent as the descriptions of God as Father, Lord, rock, ruler, judge and lawgiver. The prophet Isaiah lets God say: "As one whom his mother comforteth, so will I comfort you." In this connection, it is informative that Mary Baker Eddy, the Discoverer and Founder of Christian Science, places the motherhood of God equivalent to His fatherhood in her main work which was first published in 1875. She writes, for example: "Father-Mother is the name for Deity, which indicates His tender relationship to His spiritual creation" (Science and Health with Key the Scriptures, p. 332). 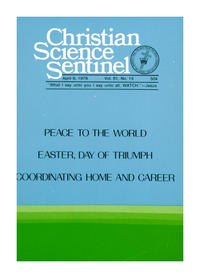