Instantaneous healing of hemorrhage after childbirth

In my first year of college a newfound friend gave me a copy of Science and Health by Mrs. Eddy. I was so thrilled with the book that I read it every spare moment. What interested me most was the fact that Mrs. Eddy affirmed continuously that God is All, and that because of His allness He is never separate from His children, but cares for each of His sons and daughters at all times. I couldn't believe that I had actually been given a book that so completely honored God—a book that explained God, Spirit, as the only reality with absolutely nothing beside Him! I accepted Christian Science as the truth of being, and it has been my way of life ever since.

Shortly after my introduction to this Science I was healed of warts that had been growing and spreading under my arm. The previous summer the warts had been removed surgically, but a few weeks later they had returned and multiplied. I kept using the appropriate medicine, but it did not bring healing. 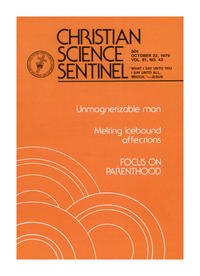