In 1929 Science and Health by Mrs. Eddy was introduced to...

In 1929 Science and Health by Mrs. Eddy was introduced to me. I read it with exhilaration and said to myself, "Of course, this is it. This is the truth!" I thought of myself as a Christian Scientist when I put the book in my trunk and continued on my tour in theatrical work. When I returned to England, where I lived, I became very ill and contacted a Christian Science practitioner, who took my case and showed me how to study the Bible Lesson in the Christian Science Quarterly each day. I was very soon healed without any material aid.

On another theatrical tour in England, when I became ill, I was obliged to conform to the rules of the company and allow three doctors to examine me; one of them was a specialist. They pronounced my case appendicitis and said I must be operated on at once. I said, "No, thank you!" I told them I was a Christian Scientist and wished to be taken to London. There I again contacted the same practitioner who had showed me how to study the Bible Lesson. I was completely healed in about two days. 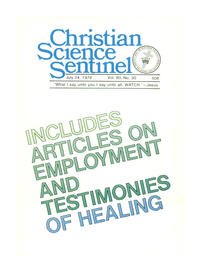