The democracy of prayer

Christian Science is a final and complete revelation, not because it has been proclaimed so by some person or persons but because of the living evidence of completeness and infinite possibilities inseparable from the revelation itself. Its teachings are based on the Bible and set forth in the writings of Mary Baker Eddy, the Discoverer and Founder of Christian Science. The irrevocable charter of the Church she founded is her Manual of The Mother Church. Testing the validity of Christian Science by demonstration, the Christian Scientist agrees with the words of Jesus, "The Comforter ... shall teach you all things."John 14:26; Thus he acknowledges and proves the finality of this Science. The revelation is complete. The demonstration of the individual worker is far from complete; hence church progress also is far from complete, awaiting fuller demonstration by church members of the truths of divine Science. 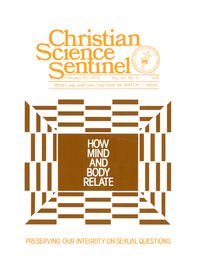