My mother became interested in Christian Science before my...

My mother became interested in Christian Science before my birth. She had been informed by a physician that she must submit to an operation for removal of a tumor if she was ever to bear children. When she spoke of her fear of the operation to her sister, a student of Christian Science, the sister asked her to read Science and Health with Key to the Scriptures by Mary Baker Eddy. She assured my mother that the truths in the book would help her. Before completing the first chapter, entitled "Prayer," my mother discovered that she was healed. This healing was confirmed by the births of my brother and me.

For over forty-six years Christian Science has been my only physician. Many times I have received protection from near accidents and the effects of accidents. Last year I awoke one morning with a severe pain in my back, which rapidly grew worse. I returned to bed and called a Christian Science practitioner in a distant city for aid in overcoming this problem. He asked me to study "the scientific statement of being" (Science and Health, p. 468), which begins, "There is no life, truth, intelligence, nor substance in matter." He said he would immediately begin to pray for me. The Bible Lesson in the Christian Science Quarterly that week, on the subject "Matter," was most helpful. The following citation stood out as though I had never read it before (Science and Health, p. 151): "Every function of the real man is governed by the divine Mind."

Send a comment to the editors
NEXT IN THIS ISSUE
Testimony of Healing
Several years ago three friends and I decided to spend the... 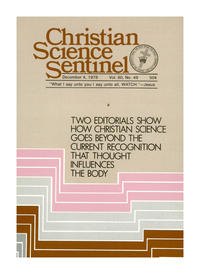