If you were asked the question "Can a true Christian be a racist?" what would you say? Yet racism continues to be a major social problem in the so-called Christian countries of the world. This is something each Christian must face up to for himself or herself. As racism is rooted out of the thought of individuals, it will be eliminated from social consciousness.

The best way to solve this problem is to turn to the teachings and example of the master Christian, Christ Jesus. He tells us and he shows us the effect of understanding God's universal love. Universal love means that everyone is included; not one is left out; each shares equally in God's care. One of the Master's most devoted followers, Mary Baker Eddy, says of him, "The purpose of his life-work touches universal humanity." Miscellaneous Writings, p. 29; 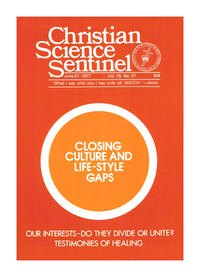