I was healed of chronic sinus trouble seven years ago while reading...

I was healed of chronic sinus trouble seven years ago while reading Science and Health with Key to the Scriptures for the first time. I was suffering from this trouble when I came upon the account of how its author, Mary Baker Eddy, healed a woman of labored breathing caused by tuberculosis (then called consumption).

The woman always suffered most severely when there was an east wind blowing. But Mrs. Eddy healed her despite the fact that at the time the weather vane indicated that the wind was coming from the east. The account ends by saying (pp. 184–185): "The wind had not changed, but her thought of it had and so her difficulty in breathing had gone. The wind had not produced the difficulty. My metaphysical treatment changed the action of her belief on the lungs, and she never suffered again from east winds, but was restored to health."

Send a comment to the editors
NEXT IN THIS ISSUE
Testimony of Healing
I am very grateful that many years ago, when solving a professional... 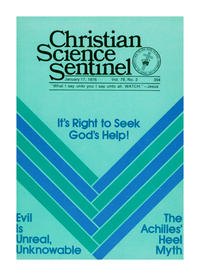