To Dispel the Mystery of Death

"Should I take the course on thanatology they're offering at school this year?" The question is increasingly asked, "Do you think one should learn about death and dying, as so many people are saying we should?"

It is said that the present-day interest in the subject of death and dying, or thanatology, is not caused so much by a fascination for the morbid as by a feeling of need to remove a veil of mystery and dread from a phase of existence that for mortals is apparently inevitable, and to make the consequences of death easier to endure.

Send a comment to the editors
NEXT IN THIS ISSUE
Testimony of Healing
I would like to thank God, our Father, with all my heart for a... 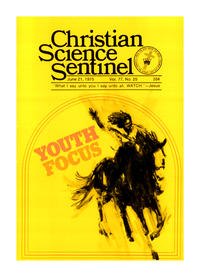