Christie dumped her school books on the table. Then she put her head down on them and cried. "Mom," she said, "I can't ever go to school again. It's just too awful." Mother came quickly and put her arms around Christie, who was crying so hard she could barely speak. "The kids followed me all the way home. They hit me with their rolled up assignment sheets. They're out there right now. Look!" Sure enough, there were four girls outside, sticking out their tongues and yelling things.

When her family had moved to town several months ago, Christie had been happy. Now that she lived in town she could take piano lessons more often. Once in a while she was allowed to play the morning song at school or the hymns they sang at the Christian Science Sunday School she attended every week. She was especially excited because just a few weeks ago she had been chosen to play an important part in the fifth grade play. She was going to be the Princess Petronella in a long, pink velvet princess costume with roses on it. 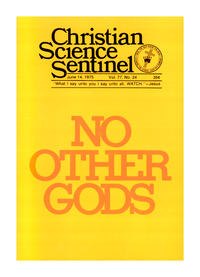