A young man phoned a Christian Science practitioner and blurted, "This is an emergency! I cut my wrist, and I'm bleeding badly. I didn't have the key to my house. All the windows were locked; so I tried to force one open. The window shattered, and my hand went through the glass. I need your help."

The practitioner responded to the young man's call with penetrating authority. He told him that God is forever Principle, the governor and maintainer of the universe. He assured the caller that he reflected the power and harmony of Principle, which was controlling every function of his being, right then and there. His functioning was, in reality, entirely spiritual, he told him, and God was the vitality of his being. God was his very Life, and this Life was never dependent on a material substance called blood. 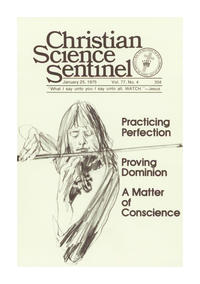