One needn't become mesmerized into believing in contagious disease and accepting its symptoms.

Why not? Because the illusion of sickness is manifested through fear, and anyone can stop fearing. Through Christian Science a person can consistently and thoroughly defend his thought in order to have complete immunity from contagion. Fear, he can realize, has never prevented God's being from manifesting perfection; and because, in reality, he is God's direct, flawless reflection, His likeness, fear can never deprive him of true energy and health.

Disease has no power, nor can it claim any. The authority it may seem to have is derived from our false concepts of God and man. But false beliefs are not law, and do not give power to disease. The law of God, good, bases all reality. Disease is the opposite of good. Therefore disease is not a law.

God is perfect, and He makes man perfect. He is the One who creates the whole universe, including man; and all He creates is good. The purity of God and man is the basis to pray from, and the very essence of effective prayer against contagion is to eradicate fear. With what? With love!

If we feel sickness coming on, we need to remember that our health expresses our concept of ourselves and the amount of false belief and fear—or love—we allow to govern us. "Perfect love casteth out fear." I John 4:18; Are we truly loving God, Love? Are we loving Him so much we are completely trustful of His care? Do we really know that His love enfolds us and protects us from all forms of evil? If so, then fear can be wiped out immediately and, with it, the symptoms of illness.

In belief, direct contact with a contagious disease isn't the only way of catching it. If we are spiritually unalert, it is possible to feel the symptoms of a disease merely by reading about it in the newspaper or hearing it described over the phone. Disease is caught through mortal thinking, which has no scientific, spiritual foundation. But in our actual identity as spiritual ideas of Mind we are not vulnerable to aggressive suggestions from any source. We are under the law of God, good, which annuls the claims of evil in all its forms. Understanding the mortally mental nature of contagion, we can prevent these symptoms or see them quickly vanish, leaving us free and whole.

Sometimes we hear that such and such is "going around." Going where? How does it move? It possesses no life to activate it, no intelligence or energy to move it from place to place, and no truth to give it presence or power. Its only movement is from one false concept to another.

In Science and Health with Key to the Scriptures Mrs. Eddy says: "We weep because others weep, we yawn because they yawn, and we have smallpox because others have it; but mortal mind, not matter, contains and carries the infection. When this mental contagion is understood, we shall be more careful of our mental conditions, and we shall avoid loquacious tattling about disease, as we would avoid advocating crime." Science and Health, p. 153; Defending our mentality from suggestion can make us immune to all forms of contagion.

At one time I said to my husband, "I feel like I'm getting the flu."

Silently I sat pondering this. Never had heard of the flu? What kind of guy was this? And then it dawned on me. He had been hinting at the truth that man is securely in God's care and beyond the reach of arguments of disease and contagion.

Man, created by God to express Himself, has always been and always will be "in the secret place of the most High ... under the shadow of the Almighty." Ps. 91:1. Man's identity is thus established safely in spiritual truth.

Immediately I realized that the effectiveness of pure, right thinking had been exemplified by Christ Jesus. And now the same Christ-power was doing its healing work, right where the need was. With this power active in my consciousness, I reasoned, how could the symptoms of flu remain?

Within a half hour I was completely well. Many times since then, when suggestions of error have been voiced by either of us, the other has asked, "What's that? I never heard of it!"

Sickness is not created by God; so it does not exist. No space is available for it to occupy, for infinite, real consciousness is filled with truth. Realizing these facts thoroughly nullifies false belief, and our immunity from contagion is assured. 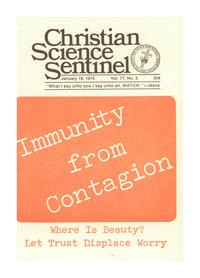