Until after my marriage I attended a church of another...

Until after my marriage I attended a church of another denomination. Although my first child was born perfectly normal and healthy, he began to suffer attacks of bronchitis each time he cut a tooth. At that time a young neighbor had a healing in Christian Science that deeply impressed me. I went to her home, and she showed me a copy of Science and Health with Key to the Scriptures by Mary Baker Eddy. I accepted her offer to take me to her church. I felt that if she could be healed then my child could be healed also. That was the beginning of my interest in Christian Science.

A little later we left that district and moved to a small country place where there was a Christian Science Society I was able to attend. During this time my son was healed. Then followed two more children and many healings and demonstrations, but the greatest joy was in my husband's acceptance of this religion. 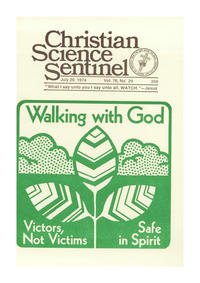