Failure Is Not a Reality

At some time most of us sag under a feeling of failure. We may seem to have failed in business, in academics, in marriage, as a parent or as a Christian Scientist. But failure for the man of God's creating is impossible. Man, eternal Mind's expression, lives only in the eternal now, at the apex of fulfillment. Failure is inextricably bound up with events in an apparent past.

Actually, failure is not a reality, because it is the illusory experience of a mortal, and mortals themselves are not realities. Mrs. Eddy in Science and Health asserts: "There is no such thing as mortality, nor are there properly any mortal beings, because being is immortal, like Deity,—or, rather, being and Deity are inseparable." Science and Health, p. 554; As we grasp this, we let go of a sense of failure. The essence of failure is to look at things wrongly now—that is, in a material and mortal light. Essential success is to look at things spiritually now. So we can at once set a course away from failure and toward success; and when we do, human lives reflect the success we spiritually achieve.

Send a comment to the editors
NEXT IN THIS ISSUE
Testimony of Healing
I am writing this testimony to express my deep gratitude to... 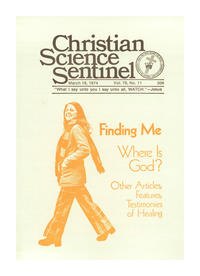