Mrs. Eddy says (Science and Health, p. 368), "When fear disappears, the foundation of disease is gone." I have proved this.

At one time I had a friend in my dormitory who had an operation to have a malignant lump removed from her breast. I expressed sympathy for her, but did not deny the reality of the condition in my own thought. Within a few days I manifested the same symptoms. I was so frightened that I could not even declare the simplest truths I had learned in Christian Science. I called a young man, a Christian Scientist I was dating (who is now my husband), and confided in him. He quickly pointed out that fear causes disease. We have only to realize the fullness of God's love for every one of His children to banish the sense of intruding fear. The healing was instantaneous and permanent. 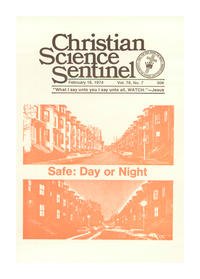