This testimony is given to praise God and bring encouragement...

This testimony is given to praise God and bring encouragement and hope to all those being tormented and fettered by the belief of being too old to find or accept a new position. Having been introduced to Christian Science and devotedly studying it, I found that the blessings of this wonderful religion became apparent very promptly.

When I took up work in my former position, I was already many years beyond the limit of age generally set for women. I had worked in the cultural department of the Foreign Office, the center of which was not located in our town. After some years the special assignment on which we had worked was finished. We were offered the choice of either moving to a new position at headquarters, which was far away from my hometown, or of being released.

Send a comment to the editors
NEXT IN THIS ISSUE
Testimony of Healing
After I had been married three years, I became interested in... 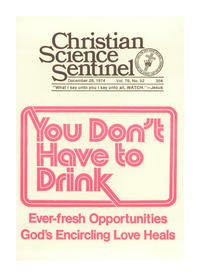