The goal of the Science Christ Jesus taught is the demonstration of immortal, eternal Life. Divine Life, our Father, God, is what he himself exemplified and demonstrated. His teachings included controlling, subduing, and overcoming the mortal sense of life. The sins to be put down were not just over acts but the thoughts causing and constituting such acts. But his teachings and example were far more than a system of discipline. They were the end, the destruction, of the mortal sense of life. Only when an individual had experienced the triumph of the immortal over the mortal to the point where the mortal was no more could the immortal self be realized.

Jesus said, "Except a corn of wheat fall into the ground and die, it abideth alone: but if it die, it bringeth forth much fruit." John 12:24; And he illustrated the truth of this metaphor by allowing his mortal body to be crucified and buried, only to be resurrected, the graveclothes left behind. He was showing us the way to eternal Life. 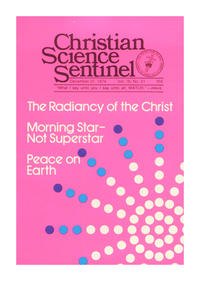