As a young child I had an interest in religious teachings, but the...

As a young child I had an interest in religious teachings, but the teachings I had received lacked something. My questions about God were not intelligently answered. What was lacking was not only an explanation of how Christ Jesus performed his cures but how spiritual healing could be done today. Christian Science was presented to me while I was a student in high school. It gave answers to these questions, and more.

Early religious training failed to teach me the difference between human emotion and divine Love. In fact, I believed mortal emotions to be a part of religion and of me. Feeling that I was a mortal separated from God, and that I needed to gain and express more emotional affection toward other mortals (which would result at some future time in a reward), I developed emotional states of thought that seemed uncontrollable. This often placed me in the position of hating those I should have been loving.

Send a comment to the editors
NEXT IN THIS ISSUE
Testimony of Healing
I shall always be grateful for a loving mother who taught me... 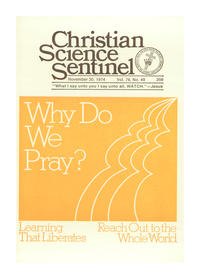