Over a rather long period of time, the belief of being an inadequate...

Over a rather long period of time, the belief of being an inadequate mother had plagued my thought and life. It seemed that the young men in our family were having some harsh experiences, and I was feeling responsible.

During about three years I had sought help from a Christian Science practitioner, each time repeating much the same tearful story. Finally one day the practitioner looked at me sternly and said something to the effect that an erroneous belief had hold of my thinking! But I could—and should—shake it off, he said.

Send a comment to the editors
NEXT IN THIS ISSUE
Testimony of Healing
My mother found Christian Science before I was born, and my... 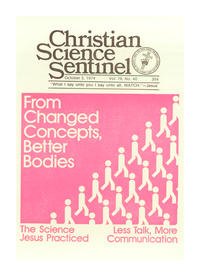