As I listened one Sunday morning to a Christian Science radio...

As I listened one Sunday morning to a Christian Science radio program entitled "The Truth that Heals," I remembered that I too had been healed, as speakers on this program had been, through the spiritual understanding of "the scientific statement of being" found on page 468 in Science and Health by Mrs. Eddy.

Two years ago I was having prayerful help from a Christian Science practitioner. The trouble was not diagnosed, but it was an internal condition which gave me such distress that I could not move about normally. One night I awoke in such discomfort that I was very fearful, for this seemed to be a serious attack. I immediately denied the error by repeating the words of that healing statement, but they were just that, words only, since I could not seem to think logically.

Send a comment to the editors
NEXT IN THIS ISSUE
Testimony of Healing
When my two children were very young, I prayed on my knees... 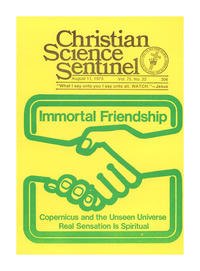