During more than forty years I have experienced an almost...

During more than forty years I have experienced an almost unbroken record of excellent health, which I attribute to the study of Christian Science. But at one period I suffered from some sort of digestive trouble which did not yield readily to my prayers in Christian Science. At last I realized I was doing nothing more than keeping myself free from discomfort, and I knew a greater effort had to be made to overcome the entire erroneous belief.

At this point, when things became worse, one morning I had to return home and retire to my room. As I lay there in a state of semiconsciousness, it seemed as though whatever was connected with the digestive process in me had come to a complete stop, and I felt as though I were suspended without support in a deep and dark well. 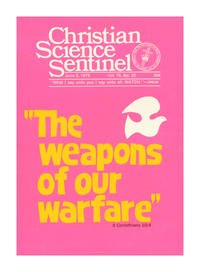