I have been very much encouraged by the beautiful testimonies...

I have been very much encouraged by the beautiful testimonies of healing and regeneration in our Christian Science periodicals, and it is with joy that I share the healing that brought me into Christian Science.

When I was a child of about twelve, I had an accident while riding a bicycle and hurt my arm badly. After the swelling and soreness had gone, the arm did not trouble me for many years, until shortly after I was married. Then it became very painful. The doctor I consulted referred me to a bone specialist, who found that a portion of the bone in my arm was carious. He said I would have to undergo an operation as soon as possible and they would attempt a bone graft, but that the bone was carious from the shoulder right into the elbow. He was almost certain that I would have a stiff arm after the operation. He said that if the operation was not successful I could lose my arm.

Send a comment to the editors
NEXT IN THIS ISSUE
Testimony of Healing
There is a story about a man who could not get a newly purchased... 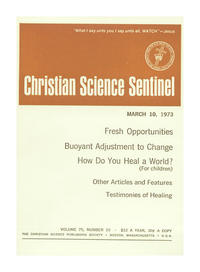