Christian Science has been in my family for more than half a...

Christian Science has been in my family for more than half a century. It has been my only physician. It was brought to our attention when a friend was healed through Christian Science treatment of an abnormal internal growth. She had been given one week to live, but within that week she was permanently healed and lived many years, well into her eighties. My father was immediately interested. He purchased a copy of the German translation of Science and Health with Key to the Scriptures by Mary Baker Eddy.

From that time on no medicines were used in our home. We depended entirely on Science. Our household became one of more loving appreciation and harmony, whereas there had been much fear, sternness, and parental domination. My parents and a sister attended church services. Within the year I too was eager to learn more of this religion, for I was considering marriage. I applied the little understanding of God's law I had at that time, and the marriage did not take place. Years later when I found a precious companion, I was deeply grateful for having made the right decision earlier. 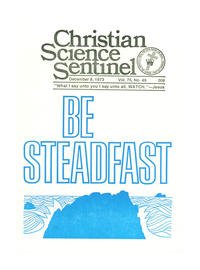