The Joy of Being Immortal

Eventually it will be proved that everyone is immortal. Paul says, "This corruptible must put on incorruption, and this mortal must put on immortality." I Cor. 15:53;

But it is not everyone who looks upon this prospect with pleasure. Immortality means "exemption from death," and many who believe themselves and others to be physical beings often find themselves in a dilemma when they contemplate the implications of universal deathlessness. Some people argue: If every human being is immortal (deathless), clearly the world would long since have been unable to accommodate the population. Others wonder: Moses would still be on earth, so would the widow of Zarephath (only she would not have been a widow because her husband would not have died), Julius Caesar, Abraham Lincoln, and Joan of Arc. How would this affect the world? Would mankind be better off or worse? Would anyone be better off if he knew that neither he nor his relatives would ever die? 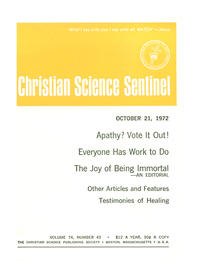