Who Is to Blame?

When a child steals a loaf of bread; when a young man sets fire to government property; when a war veteran commits a brutal murder—who is to blame? Is it the individuals themselves?—their families?—the Army?—or society as a whole? The courts may sentence a wrongdoer. They may put his body into prison, or even kill him. But thinking people, as they probe more deeply into case histories, are becoming increasingly uneasy. They wonder, Has justice really been done?

Perhaps the child was abandoned by his parents and was hungry. Perhaps the young man couldn't get a job because he was black, automatically barred from every place he applied for, because the vacancy was "already filled." Perhaps the war veteran was a commando, highly trained for jungle warfare, who had been in the thick of such vicious fighting that his sensibilities had become dulled. Can it truly be said that in such cases the guilt entirely rests with the one who actually committed the crimes? Should the child's parents, the prejudiced employers, and those responsible for the commando's training take their share in both the blame and the penalty? 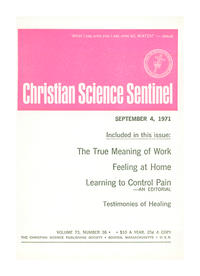