In November of 1967, a series of lessons in oil painting appeared...

In November of 1967, a series of lessons in oil painting appeared in The Christian Science Monitor. Because I had had a lifelong desire to paint, and because I had recently withdrawn my name from the list of nurses in The Christian Science Journal, these lessons strongly appealed to me. I had felt that seventy-five was the age to retire; however, this was proven unnecessary. There was no place to study painting in my midwest community, much as I had thought of it. For some time, the reference from Science and Health by Mrs. Eddy (p. 128) "A knowledge of the Science of being develops the latent abilities and possibilities of man" had been coming to my thought, and suddenly I realized that through the lessons in the Monitor I could prove this to be true, for I had been working prayerfully for an enlarged understanding of the Science of being.

I carefully followed the weekly art lessons, sketching and painting constantly. I was told by the author of the series that I had considerable talent, and after attending my Christian Science association in Boston, I applied for a class in the Boston Museum of Fine Arts and was accepted. At first all went well, but one day the assignment seemed to be beyond me and I felt a sudden panic. Instantly I closed my eyes and silently lifted my thought to God, asking for help in knowing the source of my intelligence and ability. The challenge was wonderfully met, and I felt that I personally had little to do with the success of the work when the teacher commented that it was very good. Every stroke of the brush was in the right place. I gratefully acknowledged that "with God all things are possible" (Matt. 19:26). 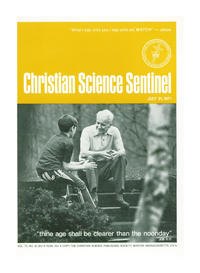