After Christ Jesus had been betrayed, tried, crucified, and had risen from the tomb, he met some of his disciples on the road to Emmaus. Not recognizing him, they asked him if he had heard what had happened. They related how "certain women also of our company made us astonished, which were early at the sepulchre; and when they found not his body, they came, saying, that they had also seen a vision of angels, which said that he was alive." Luke 24:22, 23;

Jesus was not happy with their limited view of these events. He rebuked them. "And beginning at Moses and all the prophets, he expounded unto them in all the scriptures the things concerning himself." v. 27 ; Eventually their eyes were opened, and Jesus went on to complete victory, proving the powerlessness of the forces that had attempted to destroy him. 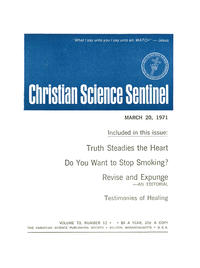