The most beautiful experience in my life occurred when Christian Science...

The most beautiful experience in my life occurred when Christian Science found me in Africa. It was wartime. My husband was taking over a new business appointment, and we found some Christian Science periodicals on a small table in the office. I learned that this little office was to be used later in the day for a Christian Science church service. My husband and I were invited to attend, and we accepted. There were five of us. A few weeks later my husband surprised me with a parcel he had ordered. It was all the writings of Mary Baker Eddy. Thus my love and study of Christian Science began, and my life began to expand.

I was able to assist in wartime evacuations of population and help in canteens and other organizations where my linguistic abilities could be utilized to assist the soldiers to write letters. All this was accomplished without fear or fatigue.

Send a comment to the editors
NEXT IN THIS ISSUE
Testimony of Healing
All my life I have been accustomed to performing, without fear,... 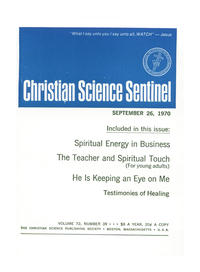