To show the power of spiritual purity in the thought of a young...

To show the power of spiritual purity in the thought of a young child, I would like to relate an experience proving how the Christ, Truth, heals. I had been a heavy smoker for many years, and had tried to break the habit many times with no lasting results. My six-year-old son, a pupil in a Christian Science Sunday School for four years, climbed up on my lap one Sunday afternoon. This was just after I had lit my pipe, and he said, "Daddy, you ought not to smoke." I agreed with him for a while. To clinch his statement that it was not good, he then said that his Sunday School teacher said it was not good. That was proof sufficient for him. I then told him that if he really thought that way about it, he should do something about it. He immediately replied, "Do you want me to give you a treatment for it?" I said, "Yes, if you think you can." He jumped off my lap, walked over to his chair, and sat praying for a few minutes, his hand over his eyes. He then went outdoors without saying a word.

The next morning, after arriving at my office, I lit my pipe, but it did not taste good. I then went to a store and purchased a few cigars, promptly lighting one, but it also did not taste good. It was then that I realized that I was healed! From that time (1921) to this I have never had a desire to smoke cigarettes, cigars, or a pipe. I was very grateful to be free after many years of bondage to tobacco.

Send a comment to the editors
NEXT IN THIS ISSUE
Testimony of Healing
When I was in my tenth year, my father was healed of blindness 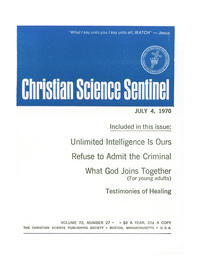