I was not raised a Christian Scientist but began to attend the...

I was not raised a Christian Scientist but began to attend the Sunday services regularly in a branch church in 1951. At this time I had smoked for seven years. It was my habit to have a cigarette the first thing in the morning, even before getting out of bed, and the last thing at night before going to sleep. I also smoked continuously through the day while at work. Several times I attempted to quit, but never could for more than a few days. It disgusted me to think that I was a slave to an inanimate object, something that could not even think or move. I gave no thought to Christian Science in relation to smoking, as I was resigned to the habit.

One Sunday during the service I listened very intently to the Lord's Prayer and its spiritual interpretation given in the Christian Science textbook, Science and Health with Key to the Scriptures by Mrs. Eddy. One line is (p.17),

Send a comment to the editors
NEXT IN THIS ISSUE
The Bible Speaks to You
RADIO PROGRAM NO. 414 - What Are We Sensitive To? 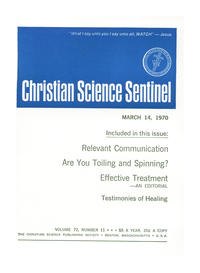