I first knew of Christian Science when I was about ten years of...

I first knew of Christian Science when I was about ten years of age and witnessed my mother's healing of gallstones. She had been subject to attacks for several years, and they were most frightening times. My grandfather had just married a Christian Scientist, who, during an attack, asked my mother if she would try Christian Science. A practitioner was called, and my mother was healed in one treatment. From then on Mother could eat anything she wanted to without ill effects.

About twenty years ago I had an instantaneous healing of what would be called sciatic rheumatism. Whenever the first symptoms of this appeared, I became weak with fear of what was ahead. The only thing I knew of Christian Science was Mrs. Eddy's hymn " 'Feed My Sheep,' " which begins (Poems, p. 14):

Send a comment to the editors
NEXT IN THIS ISSUE
Testimony of Healing
I am grateful for the privilege of giving testimony to the presence... 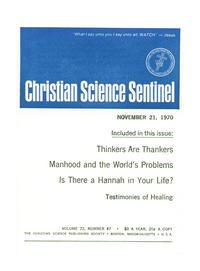