Combat Duty and the Christ

The writer and his men lay in a flooded grainfield. Enemy fire from hidden positions on the mountain ahead ricocheted off the shallow water inches from head and shoulders. Frantic with fear, the writer dug at the mud beneath him with his fingers and attempted to shrink into his helmet.

But an undefinable consciousness of the presence of God enabled him to regain control of himself and to function effectively. He quoted nothing. No words of prayer passed through his thought. He simply felt the presence of divine Love and an assurance that all would be well. Though it seemed that surely more than half the men must be lost, wounds were sustained by only two, one on each side of him, and these were minor. He knew that somehow he had witnessed the action of the Christ, the healing and protecting activity of divine Love. 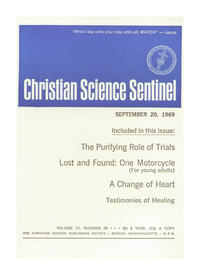