An Interview: with a Historian

with contributions from James Butler

Sir James Butler is a fellow of Trinity College and Emeritus Professor of Modern History in the University of Cambridge, England. His published works include a book on the passing of the Great Reform Bill of 1832, a life of Lord Lothian, and parts of the official British history of the Second World War, of which he is the Editor. He is keenly interested in Biblical scholarship, but does not claim any expert knowledge in this field. "God is revealed in history," says Sir James. "Christianity is a historical religion. It pays great attention to historical fact."

How can Christian Science be an influence for good in a historian's life? 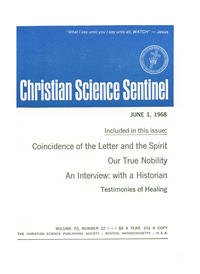