I shall always be grateful to Christian Science, which came to...

I shall always be grateful to Christian Science, which came to me about seven years ago when I was suffering from angioneurotic edema and was in very great need of help. I had been under medical care for five years and was gradually getting worse. I was told the doctors could do no more, and the potent drug I had been taking was beginning to lose its effect. Finally I turned to Christian Science as my last resort.

From the very first week of studying Science and Health with Key to the Scriptures by Mary Baker Eddy, I never had any more medical treatment. I was so new to Christian Science that I did not know what a practitioner was, and although I had been told that without continued injections this aggressive allergic condition could prove fatal, I relied entirely on God's love and care. Then, as I began to understand the practice of Science and learned of the existence of practitioners, I had treatment. After three years of prayerful work my healing was complete.

Send a comment to the editors
NEXT IN THIS ISSUE
Testimony of Healing
My heart is filled with gratitude for the many wonderful healings... 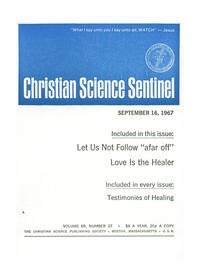