In his Epistle to the Romans, Paul describes a common human phenomenon, "The good that I would I do not: but the evil which I would not, that I do." Rom. 7:19; The basic erroneous belief involved in this phenomenon is known as animal magnetism. It is the belief that there is intelligence in matter and that evil is as real and more powerful than good. It would also claim that the material body can act independently of the thought and intention of the individual. Christian Science uncovers the erroneous nature of this belief and counteracts such false influence with the great truth that God, Spirit, divine Mind, is the only source of intelligence and hence the only source of control.

This Science challenges the belief that man's nature is material and that he is a mixture of good and evil. It adheres strictly to the Biblical fact that the real man is made in the likeness of God, Spirit, and therefore is spiritual and Godlike. This Science challenges the assumption that mind is in matter, and explains that material sense is an educated belief—false thought made manifest. Jesus demonstrated the Christ as the power of God that heals both sickness and sin. He denounced these errors as the effects of evil and fearful thinking. Mrs. Eddy says in Science and Health with Key to the Scriptures, "The Son of the Virgin-mother unfolded the remedy for Adam, or error; and the Apostle Paul explains this warfare between the idea of divine power, which Jesus presented, and mythological material intelligence called energy and opposed to Spirit."Science and Health, p.534;

Send a comment to the editors
NEXT IN THIS ISSUE
Testimony of Healing
Christian Science has brought blessings to my family for three... 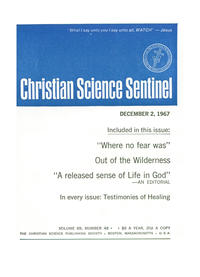