[The above is an abbreviated, postproduction text of the program released for broadcast the week of November 3-9 in the radio series, "The Bible Speaks to You." Heard internationally over more than 1,000 stations, the weekly programs are prepared and produced by the Christian Science Committee on Publication, 107 Falmouth Street, Boston, Massachusetts, U.S.A. 02115.]

RADIO PROGRAM NO. 292 - Students and Identity, Part I

Announcer: Ever since the days of the early Greeks students have struggled with the problem of identity. They've wanted to know who they are what they're identified with, and what they are part of.Questioner: Many college students wear masks and play roles. For example, if they have a crowd of friends that like to act rowdily, they fit into this role when they're with them. At other times, when they're with people they are trying to impress, they wear a different mask, so to speak.Speaker: That brings up a very important question as to what real identity is and what is merely "mask"—what is merely on the surface. We may be identified in all sorts of different ways by different people. Some will think of us one way; some another. This isn't quite it. There's also our real, unchanging identity, the way God has created us, the way God knows us. It isn't what different people think about us that counts, but what God knows about us.

And the Bible, it seems to me, is all about "Who am I?" I think of the verse (Rom. 8:16), "The Spirit itself beareth witness with our spirit, that we are the children of God." That's a statement of identity, isn't it? And Paul said too (II Tim. l:7), "God hath not given us the spirit of fear; but of power, and of love, and of a sound mind." This is the kind of identity we're given. And then the Bible has this most basic statement of all on real identity (Gen. 1:27): "God created man in his own image, in the image of God created he him; male and female created he them." Questioner: When we talk about the verse, "God created man in his own image," what is the image we mean? Speaker: It's what God is seeing, what God is knowing, the way God is identifying us. This image that God is knowing is made up entirely of Godlike qualities, of spiritual qualities that can't be seen with the physical senses. But the effects of these qualities are seen. You can't see goodness with your eyes, or touch it, or hear it, but you can be very much aware of the expression of it, can't you?Questioner: But I find that students tend to identify themselves with other things—things more tangible to them: their circumstances, the prestige of going to a certain college, how much money they have, their participation in school activities, popularity, things like this. What about that?Speaker: I think that's true, but these things are more or less the outward evidence. They're a kind of facade. They're the stuff of those masks and roles you were talking about a while ago. 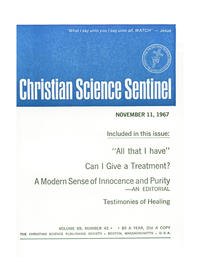