Tommy had a new jackknife with shiny blades and a pretty red stripe across the sides, and he was pleased with it. His father had shown him how to open the blades carefully and told him to always cut away from himself rather than toward his hands while using it. Tommy spent many happy hours playing with the knife.

But one spring morning after he had been out of doors for a while, he came in and told his mother that the knife was lost and that he wanted her to come and help search for it. Mother was busy at the time with household tasks and could not leave. But she reminded Tommy of what he had learned in Sunday School of God's loving care. He had gone to the Christian Science Sunday School only a few months, but he had already learned that "Father-Mother" is one name for God and that this name means "Love." 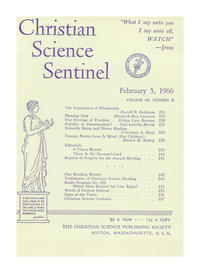