Youth and the Scientific Revolution

Jet planes thrust through the clouds; automobiles outpace the winds; television pictures flash almost instantaneously around the globe; a rocket as tall as a thirty-story building shudders on its launching pad, then streaks away towards a distant planet. In our computerized contemporary world these scenes and events are becoming commonplace. The wonders of science and technology multiply at a bewildering and accelerating rate. There are breathtaking plans for exploring the remotenesses of the material universe, as well as the likelihood of making startling new discoveries. As humanity races ahead, change and progress are the keynotes of society.

This is an age in many ways unique in the history of mankind. It is one in which great good and great evil seem to be juxtaposed and values tend to get tangled by the rapidity of the changes. The spiritual realm of God is often forgotten, and the voice of Spirit sometimes goes unheard amid the boastful trumpeting of materialism. Yet it is a period in which the lives of numerous young people are being enhanced and stabilized by Christian Science, despite the social flux that surrounds them.

Send a comment to the editors
NEXT IN THIS ISSUE
Article
"Who did hinder you?" 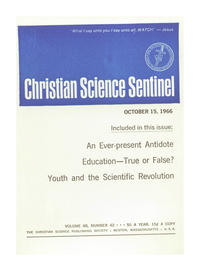