The world—nations and individuals—is thinking of power, desiring it yet fearing it. Worldly thinking believes that power is material and that it is both constructive and destructive. In human belief, the tremendous energy released by the nuclear fission or nuclear fusion of certain material atoms may be used for the benefit of mankind but may also be used to destroy civilization; and there is fear that this power will be used destructively.

Christian Science is bringing to the world a different concept of power—the realization and understanding of what power really is. Since his textbooks are the Bible and the writings of Mrs. Eddy the student of this Science naturally turns to them to gain a clear comprehension of what constitutes spiritual power. In the twenty-ninth chapter of I Chronicles he finds this inspiring statement: "Thine, O Lord, is the greatness, and the power, and the glory, and the victory, and the majesty: for all that is in the heaven and in the earth is thine; thine is the kingdom, O Lord, and thou art exalted as head above all."

Send a comment to the editors
NEXT IN THIS ISSUE
Article
Don't Tease! 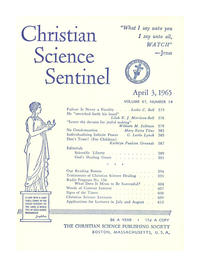