The Call to Discipleship

It is related in the Bible that as Christ Jesus walked by the Sea of Galilee, he saw two brothers fishing. He said to them (Matt. 4: 19), "Follow me, and I will make you fishers of men." And, we are told, "They straightway left their nets, and followed him." Farther on, Jesus called two other brothers as they sat mending their nets. The Bible account tells us, "They immediately left the ship and their father, and followed him."

As disciples of Jesus, these four men moved into a world where miracles of spiritual healing became natural occurrences. In three short years their Master trained them to heal the sick, raise the dead, and reform sinners. He made them fishers of men's hearts and minds. Peter, Andrew, James, and John may have faltered and sometimes failed during this period. But Jesus' compelling call to discipleship, and their unqualified response to that call, enabled them to keep the faith and to fulfill that high calling. 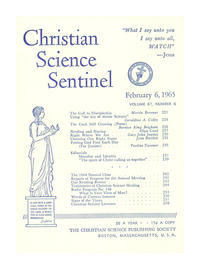