A Report from the New York World's Fair

The half -million people who saw the Christian Science exhibit at the New York World's Fair last year will soon be joined by a new throng of visitors when the Pavilion opens its doors again on April 21 .

Although the exhibit remains basically the same, several interesting improvements are being made to sharpen its message. A few sections will be extensively redesigned, and an outdoor "welcome"' feature will be added alongside the entranceway to the Pavilion.

Send a comment to the editors
NEXT IN THIS ISSUE
Testimony of Healing
It has been half a century since... 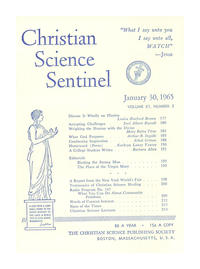