My family and I have had many...

My family and I have had many healings in Christian Science, including a number which were instantaneous. The one I wish to tell of, however, took some time.

The bosom pal of our seven year-old son is a neighbor boy. This neighbor family, who are not Scientists, left for a week of vacation. Toward the end of that week, it became apparent that our son had impetigo. The belief was that he had caught it from his playmate. We did prayerful work, but the healing did not come. We got in touch with a Christian Science practitioner, who began to give the boy treatment.

Send a comment to the editors
NEXT IN THIS ISSUE
Testimony of Healing
In one of her poems, "Communion Hymn,"... 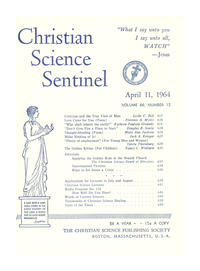