Obedience to the teachings of Christ Jesus has helped great numbers of people to turn from materialism, with its evil effects, and seek the harmony found in Spirit, God. Whether people admit it or not, the measure of freedom which our present society enjoys is the result of the direction which preceding generations have taken in obedience to the Master. But a clearer understanding of his precepts has been needed. Many people long to know what the meaning of life is in the light of modern discoveries and where it is tending.

Clear direction has come with the discovery of Christian Science by Mary Baker Eddy. Before her discovery the directives of Jesus were not understood in their Science. For instance, his explanation that the devil, or evil, is a liar and the father of lies and that "there is no truth in him" (John 8:44) has been largely passed over because the scientific import of this analysis of evil has not been grasped. 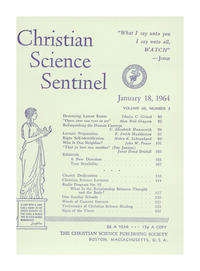