My gratitude for Christian Science is based on the spiritual enlightenment the writings of its Discoverer and Founder, Mrs. Eddy, give to each individual diligently seeking a better understanding of God and man. Naturally, the continual spiritual unfoldment gained from the daily study and practice of her teachings manifests the proofs, demonstrations, and blessings divinely bestowed on those seeking "first the kingdom of God" (Matt. 6:33).

As a boy I had the urgent desire to understand better the seeming mysteries, occasional contradictions, and admonitions of the Holy Bible. A faithful pastor had been very helpful; but not until I first came into contact with a Christian Science practitioner did I begin asking questions. A short time later I attended a Christian Science church service with friends. It was then I grasped, and cherished, many inspiring statements and was spiritually uplifted. The change which resulted was a surprise to many when a frail and somewhat timid young man became a healthy and successful individual. 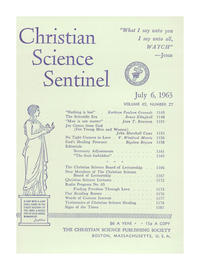