"Back on the beam"—this is the way an enthusiastic and grateful serviceman and his wife describe the help they received from a recent conference for Christian Science military personnel and their families held at Berchtesgaden, Germany. Owing to their location, this couple had been deprived of regular church attendance and normal association with Christian Scientists. Gradually they had become depressed and bitter, and this attitude was reflected in the actions of their children. But the spiritual truths brought out in the conference awakened them, and peace was restored to their family.

Many others were blessed by the conference, which was held for the fifth consecutive year at the United States Army Religious Retreat Center. Nearly 300 people came from Europe, North Africa, and the Middle East. For many it was their first contact with church for many months. 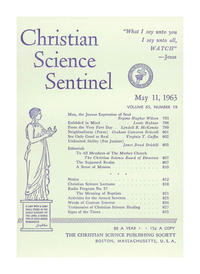